Ariel wrote this at the end of her first year studying English here at Christ's College, Cambridge. She is from York (North Yorkshire), where she did A-Levels in English Literature, Maths, Psychology, and Drama and Theatre Studies.

What attracted you to your course at Cambridge?

The thing that most attracted me to studying English at Cambridge was the way that its taught here, particularly supervisions, the small-group teaching offered at Cambridge. All my supervisions take place in Christ's and are usually in groups of four for PCCP (Practical Criticism and Critical Practice) and two for the period paper, but I have had one-on-ones and a few in threes. This low student-to-teacher ratio was a little intimidating at first, but the atmosphere is really relaxed; they're structured mostly as a discussion about the week's texts and yours and your supervision partner's essays. These small class sizes are really beneficial as I get direct and helpful feedback on my work as well as the opportunity to discuss the texts that we’re studying in depth.

What aspect of the course were you most nervous about?

I was most nervous about the Medieval paper, especially after finding out that Christ’s start with it so you’re kind of thrown in at the deep end, but the supervisors are aware of this and offer all sorts of support, like language classes to help you understand Middle English. In a way, it’s the best paper to start with because everyone is in the same boat, as very few people have previously read Medieval texts, so we were all figuring it out together, and it made the Renaissance paper a lot easier; the language was comparatively much simpler and it was really interesting to spot themes or tropes that came up in both periods and how they had evolved over time. 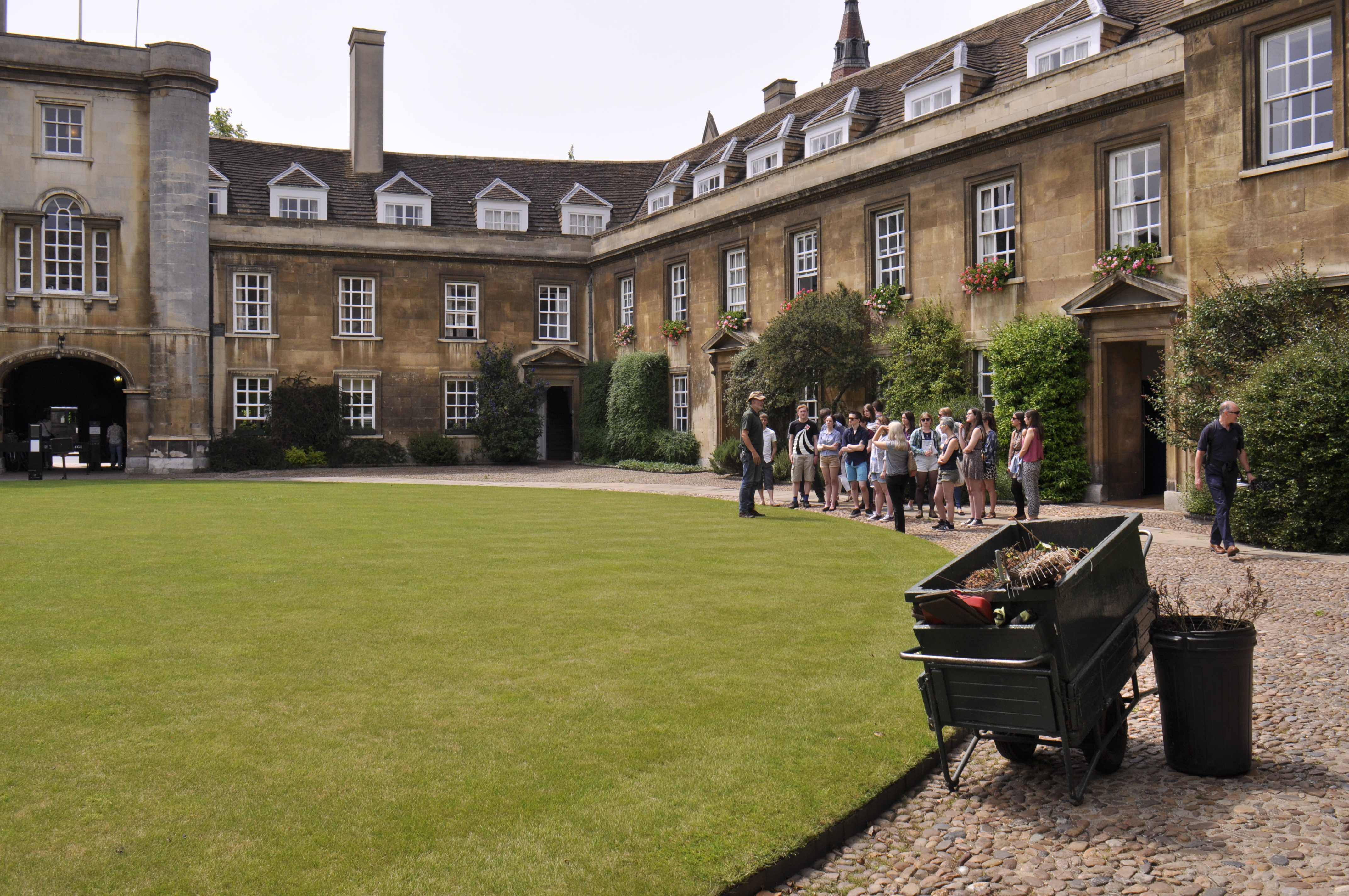 I chose Christ’s because I thought it was a decent size – not too big and not too small – and because of its central location, and both of these have definitely been huge benefits this past year. Being only two minutes away from Sainsbury’s is so helpful, as well as being about 15 minutes away from lectures and five minutes away from both the main student theatres (the ADC and the Corpus Playroom). I also found it really easy to meet people and make friends thanks to the size of the college.

Has Christ's lived up to your expectations?

Yes and there were bonuses! After coming to Christ’s, I found out loads of other advantages that Christ’s has over other colleges which I didn’t even think to look for when I applied. For example, free washing machines and the Fellows' garden and pool being open to students. Christ’s also has a top-up bursary scheme as an addition to the wider Cambridge bursary which has really helped me this year and helped put my mind at rest when it comes to finances (something I was really worried about before starting uni).

I remember the application process being quite long as there were so many stages to it, but most of these stages (eg. the additional questionnaire after the UCAS application, and written work submission) were straightforward and easy.

I sat an admissions assessment as part of my application which, as the point of it is that it’s unseen, didn’t require too much preparation; I did one practise paper in timed conditions and planned another and I felt like that prepared me well for it. I kind of enjoyed the actual test  because I just wrote about whatever interested me in the extracts which you don’t really get the chance to do at A Level – you do it a lot at university though!

I was pretty nervous before my interview. I remember watching a load of videos about body language and handshake etiquette, but I really didn’t need any of that, mostly because it isn’t like a normal interview. They didn’t ask me about myself or my suitability for the course, instead they want to see how you work with material and how you discuss it academically, so it was structured more like a conversation.

I was interviewed online which I thought was better in some ways because I was at home so I could make the environment comfortable and I didn’t have to sit in a waiting room with my nerves building up (what I ended up being most nervous about is that my cat would jump into frame!). On the day, I thought that one of my interviews went really well and the other went really badly, but after I got to Cambridge, everyone on my course said the exact same thing!

How did you find settling into Cambridge?

Before I came to Cambridge, I took part in the Bridging Course where I stayed in Cambridge for a week during the summer which really helped me because I was able to ask our mentors all the random questions I had and I knew my way around the city before I started in October. The course was for new students from areas where people don't often go to top universities to give us a feel of what life at Cambridge would be like. We spent a week in-person living in New Court and a week online where we attended mock lectures and supervisions. During the in-person week, we got to do loads of extra stuff in and around Christ's, including eating in the formal hall. Because of the pandemic, this was the first chance I'd had to visit Cambridge, so it was both really fun and it put my mind at rest about coming to a new city for uni.

Even though I wasn’t going in totally blind, I was still pretty nervous about starting my course and living away from home for the first time, but I was looking forward to meeting new people and seeing the friends that I’d made on the Bridging Course. Fresher’s Week was very hectic in the best way. It was actually my birthday during Fresher’s Week, so my favourite memory from it was when these lovely people who I’d only known for a few days bought me a cake and threw me a surprise party! Starting lectures and supervisions was, of course, daunting and it took me a while to figure out the right balance, but since all lectures for English are optional and all supervisions for English at Christ’s are at the same time each week, it was soon easy to organise my own work plan.

I have two supervisions a week – one for Practical Criticism and Critical Practise and one for the period paper I’m studying that term – and usually between six and ten lectures. I personally find lectures really helpful but, since they’re optional and often don’t directly relate to the text you’re studying that week for your supervisions, you have the freedom to go to as many or as little as you find useful.

The biggest difference between work at uni and work at A Level, I think, is the style of work as, with the low amount of contact hours, the majority of work is independent. Your supervisor will usually set a text/texts for the week and a list of secondary reading, but you’re encouraged to find your own bits of secondary reading based on what you find interesting about the text. You then come up with your own essay question and write your essay, and the next week you move on to new texts. This was the thing I was most worried about before coming to Cambridge – I was used to studying two or three texts in a whole year and I didn’t know if I’d be able to physically read that much in a week, let alone analyse it. However, these texts are always short and supervisors will send out a reading list during the holidays for the longer texts you’ll study so you have plenty of time to read them, and I’ve found that I actually really enjoy finding my own angle on a text and looking for secondary criticism to back it up (which is easy with online databases like iDiscover and JSTOR, and the many amazing libraries).

How have you handled having optional lectures?

Since I find lectures really helpful, I try to attend as many as I can, but there are sometimes conflicts in which case, for first year, I prioritised PCCP lectures as there is a PCCP exam at the end of the year, but it's really up to you. At the start of each term, you get sent a huge document called Notes on Courses which is a timetable of all lectures happening that term. I was absolutely terrified when I first saw it, but once I realised the majority of the lectures were irrelevant to me (as they weren't either of the papers I was studying that term - the document included all lectures for second and third years too) it was much more manageable. I do recommend getting yourself a diary, though, so you can plan everything out!

The topic I’ve most enjoyed this year is the Shakespeare portfolio because I love both his work and studying plays as a genre because you get the opportunity to bring in other mediums to your analysis from contemporaneous rules for actors to modern day performances.

What do you do when you're not working?

When I’m not working, I’m usually found lurking around the ADC or Corpus Playroom, the two main venues of student theatre in Cambridge. The university theatre scene is incredible in Cambridge, with at least four shows being performed every night. Not only is there always something great to watch, but this also means there are tons of opportunities to get involved, and particularly loads of chances to try something new. For me, I mostly write and direct theatre, but I’ve ventured into the famous world of Cambridge comedy by trying stand-up comedy for the first time which has been insanely fun (the prestigious Cambridge Footlights are actually very welcoming to newbies!).

What are you looking forward to next year.

Christ’s also has its own theatre and its own drama society, CADS, which I’m going to be the vice president of next year. The society puts on a few shows every year, as well as a few events hosted in the Buttery by yours truly! I’m also the president of Christ’s Board Games Club as of next year which is a really chill society where we just unwind and play board games.

Next year I'll be doing the Modern and Long 18th Century papers, so I'm looking forward to studying some more recent texts, as well as getting involved in some more theatre projects.