Anna is from Mulhouse, France, and wrote this at the end of her second year studying Maths at Christ's. She went to a French-German school in Germany, where she did the Baccalauréat Franco-Allemand, equivalent to both the German Abitur and French Baccalauréat (but not the Abibac). She specialised in Maths and Physics.

By the time I had to choose, I knew that I wanted to study mathematics. I had been participating in maths Olympiads for 5 years by then, and I wanted to continue my mathematical journey into undergrad. But it was not easy to decide where.

I also considered staying in France and enrolling in the "classes préparatoires" (preporatory classes) in order to enter a "grande école" (specialised university). Eventually, I chose Cambridge because I sought a more cosmopolitan experience, to get to know a new country, new culture, to have more opportunities for an international career. To be honest, I was also bewitched by the idea of studying in such a magical and ancient-looking city, of which I had caught a glimpse during a maths boot-camp organized by current Cambridge students, who I met at the maths-focused camp Maths Beyond Limits (MBL).

Was there anything that you were nervous about in relation to the course?

Without a doubt, I was very nervous about the course, mainly because I didn’t know what to expect: How hard it would be? Would be teaching style suit me? Would the supervisors be as strict as some people told me? Is the atmosphere excessively competitive? I still sometimes feel nervous, but I love what I am studying, and it genuinely captivated me. My previous concerns have disappeared!

It was, like the application to Cambridge in itself, a rather spontaneous decision. I browsed through some online forums. First, I restricted my shortlist to a few possibilities by cutting out colleges I definitely didn’t want to apply to (too far away, too expensive, ugly scarf color, etc.), then I tried to see which colleges have the most friendly atmosphere.

At some point I came across the Student Profiles section on Christ’s website. I was attracted by the fact that one of the students said despite being academically demanding, Christ’s isn’t excessively competitive, and furthermore, introverts like me feel comfortable there. I also liked the idea that Christ’s belongs to the more ancient Colleges, with a certain historical aura.

Has Christ's lived up to your expectations?

Definitely. It is as friendly and cosy as it was described. The porters are lovely. You can ask them the stupidest of questions, or come 5 times in a row to the “plodge” guiltily admitting that you locked yourself out. They will always be supportive and understanding.

Christ’s is not a huge college, so you don’t feel like a small fish in a large pond.

An advantage I didn’t think about before applying, and discovered after moving in, is the fantastic location of Christ’s. There are almost no key places that are more than 5-minute walk away: the post office, Sainsbury's, stationery shops, the market, several banks, and more.

Cambridge can be quite an intense environment. The workload may feel daunting, especially towards the middle of term. So the friendly atmosphere that prevails in the college on the part of supervisors, porters and staff is very important and helps to counter some of that pressure.

What is your favourite place in College?

The Fellows' garden is a very peaceful place where you can breeze fresh air and enjoy the sunshine, especially in spring time. I also enjoy dropping by our college buttery and have one of their tasty Costa coffees.

What do you think of the collegiate system in general?

It definitively adds something special to the studying experience. I enjoy having a smaller community inside the University, with all the little things that bring them together: the Upper Hall and Formal Hall, the Buttery, Christmas Concerts organised by the CCMS (Christ’s College Music Society). However is worth noting that the collegiate system means that despite being at the same university, people may have very different experiences, which can put some pressure on choosing the right college.

What advice would you give to someone struggling to choose a College?

Choosing a College is definitely not an easy task, there are so many of them! Here are some aspects that are (in my opinion) worth thinking about while applying.

Do you want to live in a central College, or farther away? Central Colleges have close access to facilities, as described above. Colleges situated farther away from the city centre are quieter, the tourist traffic around them is less intense, and sometimes they have more place for sports facilities.

Do you want to live in an old College or a modern one? Is this something that is important to you? Some of the older colleges are more formal and traditional than others, whereas modern ones might have different facilities?

Do you prefer larger Colleges or smaller ones? Having more students mean there are more friends to make, but smaller colleges can have a more 'community' feel. What is the size of the cohort for your particular course: would you prefer for there to be a big group or only a few?

If there is such an opportunity, definitely try to go to an open day and have a look at the Colleges for yourself.

Have you recieved any particular support from College? po

This summer, I travelled to Oslo to be a coordinator at the International Mathematical Olympiad. The College kindly supported this initiative financially. They also offered me some support for practising Dancesport with the Cambridge University DanceSport Team (CUDT).

The application process wasn’t too invasive: two interviews (usually on the same day), then  preparation for STEP, and finally the actual STEP exam. To be honest, during my last school year, I was so absorbed by maths Olympiads, and the heavy workload at school that there wasn’t much concern left in me to worry about the application process!

We had two interviews, one pure and one applied. Before the pure interview, we were given some time to think about roughly 4 different problems, each with several questions. For instance, one was about curve sketching, and another one was more conceptual, where you had to figure out how to reapply results from previous parts.  These were then partially used as a base for the questions of the interviewer. You had to show that you are a flexible thinker, who can grasp the hints that you are given.

I thought that this first pure interview went alright. Of course, I had no idea what the expectations were, but it didn't seem too bad. I had slightly less positive impressions about the more applied interview: although I had practised the skills, I managed to make some sign errors! Luckily, later I found out that everything worked out well.

We have between 2 and 4 hours of lectures in a day. In first year, it's usually 2 hours of lectures a day. There are also 2-3 supervisions a week, where there are only a few of us and an academic. During the supervision, we discuss the solutions to example sheets that we have handed in beforehand, and any course-related topics.

I always enjoy the supervisions in which we have the opportunity to go a bit further in the material: get a glimpse in the courses of the following year, some insight into how what we are learning may be related to current research topics, or see a way to generalise propositions or see them in a bigger picture.

I would say, managing your workload and a healthy “work-life balance” is one of the big challenges of a Cambridge student! I experienced it especially in my second year, after the peak of the Covid-19 pandemic was over and there started to be a lot going on in Cambridge besides maths.

In my case, I found out that it is helpful to try to start on example sheets as early as possible, especially in the subjects that are conceptually more difficult, so that your brain has a reasonable time to digest the material.

As huge as the workload might be, I would also say important to find some time off and not bury yourself completely in your studies. I don’t believe that most of the people can actively think about their subject 24/7. Your brain needs some time to reflect on the problems without you consciously pushing it.

If I’m not working, I am playing the piano, listening to audiobooks while cleaning my room or spending time with friends: we discover a new place where to eat, or watch a film. We also have a very nice Volleyball team in our College, and I enjoy playing with them greatly.

Finally, I also practise Dancesport with the CUDT. It's something that I started as an adventure in my first year and it’s incredibly fun!

At the start of term, when it is not so crowded, I like to work in the College library. There are also other rooms organised for studies, such as the Plumb Auditorium. Working in a café (like the Waterstones just across from Christ's, for instance) is also something I like to go for. Alternatively, Cambridge has countless libraries you can study in!

What have you enjoyed most about life at Christ's this year? 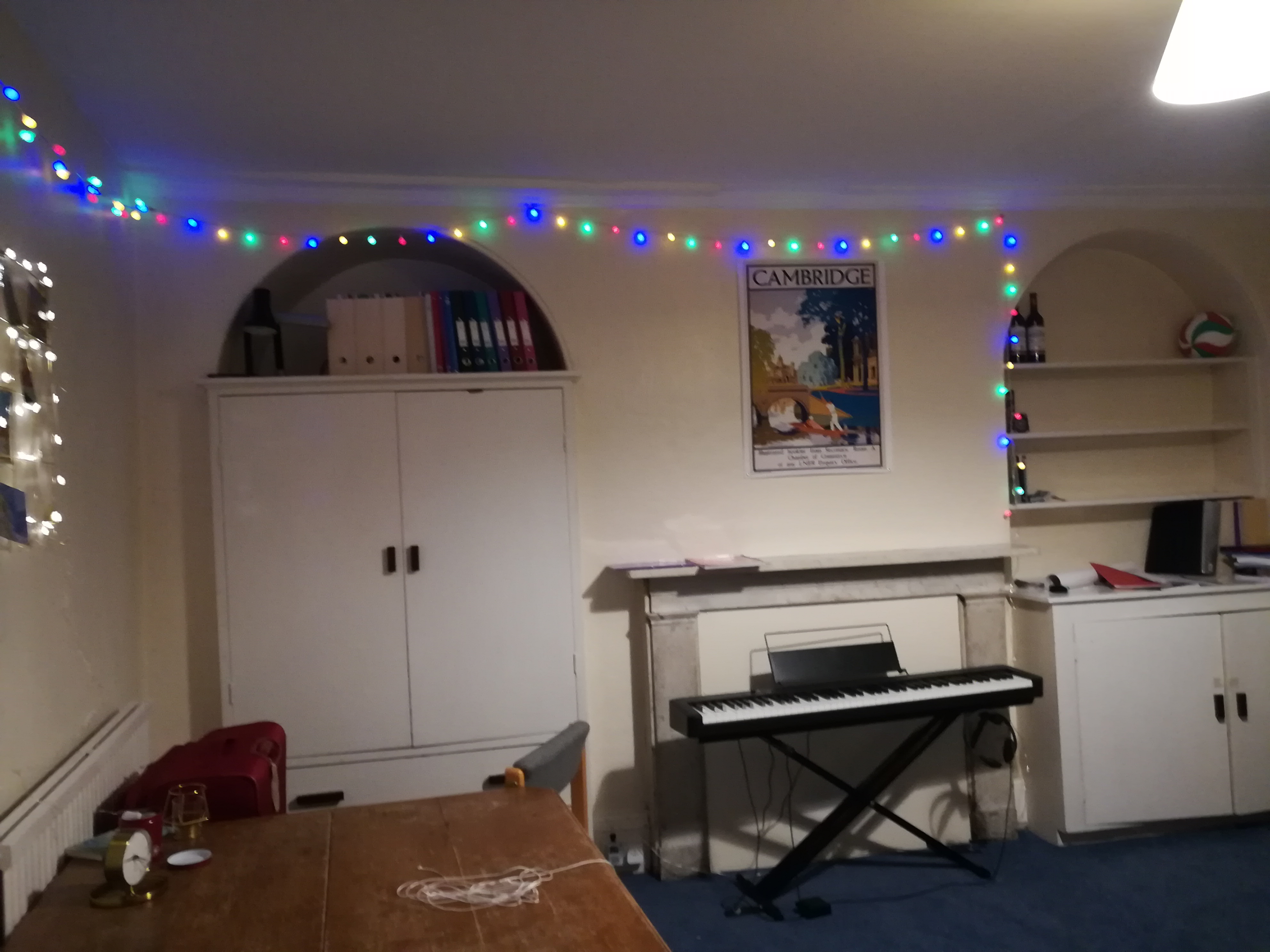 Christ’s has a very warm and welcoming community, and I’ve met some fantastic people while studying there. I've enjoyed sharing some of the 'little things' mentioned above with them: things like dinners in the formal hall (which despite being compact compared to other colleges is no less magical and Harry Potter-y!); picnics in the Fellows' garden; and trips to to Jack’s Gelato, an ice-cream shop in the town centre.

This year I lived in a room in a smaller building called Q, which is in Third Court and well-known around college for its spacious kitchen. I had a lovely large room, and relatively cheap. The kitchen is a good place for after-studies hang-outs and was often busy. I organised a couple of cooking sessions there with my friends!

Usually, I travel home to spend time with my parents, or go on holiday. A non-negligible part is also spent on doing CATAM (Computer-Aided Teaching of All Mathematics) projects, finishing example sheets left from the previous term that we have to hand out for the next one, and revising the course material. This year, I will spend my September in Germany for an internship at the University of Bonn.

I am really excited for part II courses. Finally, we can dive into the more thrilling and hardcore mathematical topics. It is rather heart-wrenching that there are many more interesting courses than you can realistically take! I'm still deciding what I will choose, but I will probably move towards algebra and analysis, the areas I am most interested in.