Becca is from Wimbledon, in London, and wrote this at the end of her first year studying Computer Science here at Christ’s College, Cambridge. At school, Becca sat A-Levels in Maths, Further Maths, Physics and Computer Science.

Why did you choose Computer Science at Cambridge?

I already knew that I wanted to continue with Maths, after really loving the subject at school. I then found myself enjoying the programming and the theory that I studied as part of my Computer Science A-Level. The course at Cambridge is so varied, and meant that I could try a bit of each of the huge range of fields that Computer Science has to offer (and continue with some Maths). I began my degree with my mind set on cyber-security, but I’m glad I didn’t choose a course with a more of a security focus like some other unis offer. Even in my first year, I’ve learnt about aspects of Computer Science that I didn’t even think about when applying and it’s showed me the breadth of topics that fall under the Computer Science umbrella.

Why did you apply to Christ’s?

I came up to Cambridge for an open day at Christ’s and had a look around a couple other Colleges but ended up liking Christ’s the best. It’s a central, pretty, and medium-sized College, and when I visited it just had a welcoming and friendly atmosphere that I loved. Since arriving all those first impressions have proved true. The size is perfect, there aren’t too many people in the year (you end up knowing most by name), but there are enough people that you form close friendships with those similar to you.

I think the collegiate system at Cambridge is really valuable, and I definitely saw its advantages in the first few weeks. It was useful to have the support network of "college families" (two second years as “parents” and a couple of other freshers as “siblings”) - this and having a manageably sized cohort of incoming freshers made everything a lot less daunting on day one. I also noticed that you quickly start to recognise people around College and the small size allows a little community to form.

There are only small numbers of people studying each course – in my year there are five computer scientists which meant I also had people I met in the first couple of days who were in exactly the same boat and I could sit in lectures with.

"You quickly start to recognise people around College and the small size allows a little community to form." 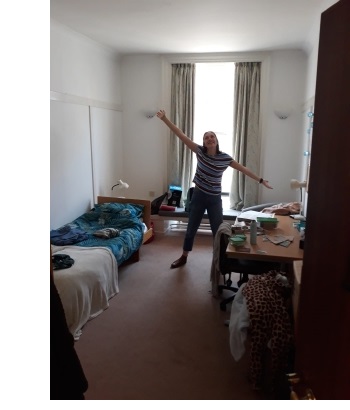 Was there anything about the course that you were nervous or unsure about?

I was quite worried about being a female student going into Computer Science. I went to an all girls school, so on visiting open days for the subject, I noticed the extent to which I was part of a minority (normally only one of a couple girls in the room). I found out that nationally only 10% of Computer Science students are female, and was concerned that I wouldn’t fit in with my cohort or that people would assume I’d only gained my place through positive discrimination. Since starting this course, many of these fears have diminished and I found out that I’m part of a cohort of 25% female students (a Cambridge record I think).

I have made friends with female (and male) CompScis (Cambridge slang for Computer Science students) from other Colleges, and as soon as I joined I attended a welcome event ran by women@cl, a network of female computer scientists that run events and talks throughout the year. There is also the opportunity to attend the annual Oxbridge Women in Computer Science Conference. I’m still frequently met with surprise when people find out what I study, but it’s really good to see that the percentage of women seems to be on the rise. There are definitely more female computer scientists around than I’d imagined - even 5 of my 18 lecturers this year were female.

"There are definitely more female computer scientists around than I’d imagined - even 5 of my 18 lecturers this year were female."

Were the interviews what you expected them to be?

I was told a lot about what the interviews would be like by many different people! My school sent me on an Oxbridge interview day a week before my interview, where I was told that I would need to take a week off school to spend time preparing if I wanted a chance of getting into Cambridge. Well, I didn’t take the week off and here I am!

I think it’s definitely a case of what you know and not what you don’t know. The day helped with thinking about the way to approach the mathematical questions and remembering to talk through your thought process when answering them (see the advice in this Cambridge film - the interview), but my interviews were almost entirely mathematical/logic questions and ended up not being a quiz on the history of Computer Science. I came out of my first interview thinking it had gone so badly that I had no chance of getting in, so I went to my second interview with that in mind and just enjoyed it – I then came out feeling like that one had gone really well!

How did you prepare for the Admissions Assessment?

There is an Admissions Assessment for Computer Science applicants. They've changed it a bit since I applied, and I know that applicants now take the Cambridge Test of Mathematics for University Admissions at school (or at a test centre) on a specific date in late October or early November. Nonetheless, I think preparation I did for mine is still relevant. Practicing maths questions in a similar style to the Admissions Assessment undoubtably helped me to prepare, as well as doing past papers available online. I also found questions from the Maths Admissions Test (Oxford’s maths assessment) and questions from the British Mathematical Olympiad particularly useful. 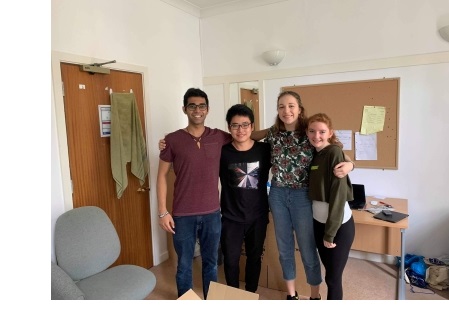 Did you find it easy to settle in?

Freshers’ Week was super hectic. As well as the packed schedule that had been organised, I’d also left the Computer Science pre-arrival course until the last minute, which meant that every spare second was spent doing that. A lot of the Freshers' Week activities really focussed on getting to know new people, and I remember being completely exhausted (in a good way!) by the end of the week.

I settled in fast and it helped that I got on well with my neighbours – we shared a small corridor of four rooms and stuck together a lot in the first week. We had lots of freshers' events which helped to get to know the College and my new home, but it probably wasn’t until lectures started that I got settled with the city. It helped that between lectures and sports I had explored in most directions before the end of the first week.

"A lot of the activities really focused on getting to know new people, and I remember being completely exhausted (in a good way!) by the end of the week."

In an average week, I have three or four supervisions which make up most of the workload. You are given several questions to go through before each supervision. Lectures aren’t compulsory but are often useful, so most people go to them. My days were reasonably structured and tended to start with two lectures in the morning (nine out of eleven of them were in the city centre and two were in the computer lab in West Cambridge) and then afternoons would mostly contain a supervision (often in the lab) or practical. In the first term we had a hardware practical every fortnight. Some of the courses also have a programming element called “ticks” which are pass/fail programming tasks that are completed using online instructions.

The workload is immediately noticeable, but I’d say I was eased into it slightly which really helped, especially as there is so much going on in the first few weeks. I am often busy during term time and often sleep has suffered because of it, but I really enjoy all the extra things I do so I don’t mind (my friends probably do when I complain to them!). It’s definitely possible to find a balance and it’s a really personal thing - there are often optional extension parts to supervision work and programming tasks and some people choose to do all of them, while others do a handful and the rest do none. So there’s the option to spend a varied amount of time focused on your degree.

I play netball and football at College level. At this level sports are great fun and can be as much or as little of a commitment as you like. There are some people that have played in one game the whole year, and others that attend every single match without fail. I had played both sports before but enjoyed trying mixed netball for the first time. The time commitment isn’t huge, often just an hour a week per sport. Like any sport, you get to know your teammates well and it’s a nice way to get to know people in other year groups in College. We often come back from a match and eat brunch together as a team.

I also got involved with a student charity initiative called the May Week Alternative, that works to celebrate giving. It was a rewarding experience, being part of a lovely community and being able to raise over £35,000 for charity. The group also puts on an event for all those that donated in May Week. It's been interesting to see how this was done on a starting budget of £0 and I'm looking forward to taking a larger role in its organisation next year.

Cambridge has a large theatre scene and I’ve enjoyed getting involved in a handful of productions, mostly put on by Christ’s Amateur Dramatic Society (CADS). I’ve done tech for a couple of shows (lights/sound), stage managed a couple and taken a few publicity photographs and headshots. Even though I’m not acting, it’s fun to be part of the production as a whole.

"At this level sports are great fun and can be as much or as little of a commitment as you like."

There is no choice between the modules you do in the second year of Computer Science – but honestly, I’m glad because I have no idea what I would have picked. I’m hoping that continuing with the range of topics will help me decide what I want to focus on in third year.

I’m looking forward to living with my close friends in a College-owned house on Jesus Lane next year, we plan to do a spot of cooking together and I’m excited to spend time with them all. Despite still being College-owned, I think the houses give more of a feeling of independence which I’m excited about.