Ana-Maria wrote this at the end of her first year studying Human, Social and Political Sciences (HSPS) at Christ's College, Cambridge. She is from New York, in the United States. When she applied, she had already met our entry requirements as she had taken Advanced Placements in United States History, World History (Modern), Art History, English Language and Composition, and Environmental Science. In the year she applied she then completed the American high school diploma alongside further Advanced Placements in English Literature and Composition, and Government and Politics.

What attracted you to HSPS at Cambridge?

In the American school system, you take all types of classes in high school and the first couple years of college. Typically, students don’t even choose what they “major in” until their second year of college. Accordingly, the main thing I was looking for in a UK course was flexibility in curriculum and the ability to (somewhat) choose what I wanted to study from a variety of disciplines. I knew I wanted to do something in the humanities, and HSPS seemed like a suitable combination of multiple things I was interested in—geopolitics, sociology, international relations, and more. I particularly liked that I’d be able to specialize in my later years, after exploring a few different options in the humanities.

Was there anything that you were nervous about, in relation to the course?

I was worried that I would feel like I missed out on the well-rounded, liberal arts education that many American schools tout as a selling point. It’s true that the Cambridge (and more generally, UK) system doesn’t offer some of the really niche classes that you can sit for a term in America. And, although you do have flexibility in HSPS, it’s not as much flexibility as you would have in a typical American university. Personally, I don’t feel that I missed out much, but that’s definitely a consideration to take into account as an international student.

How did you find being pooled to Christ's?

I originally applied to King’s, but was pooled to Christ’s in the winter. As is often the experience for pooled students, I honestly could not imagine being at another college. I have had an absolutely fantastic time at Christ’s. The people are absolutely lovely, the college is incredibly supportive, and everyone is super helpful and kind. The location is amazing and the grounds are beautiful. I did not find the change hard at all. As a side note, for international students, I’ve really appreciated the storage spaces for holidays (particularly in the summer), because it means you don’t have to pack all your stuff up and move it across the world!

What is your favourite place in college?

My favorite place in college is Third Court. It’s absolutely gorgeous, particularly in October and from May onwards—the gardens have an absolutely lovely ambience. The flowers also bloom right around exam season, so it’s nice to at least be stressed in a floral environment. I also like sitting there with friends, picnicking, eating my meals there, and more.

I didn’t have much support for the UCAS application at my old school, so it was a bit hard to navigate the expectations. W 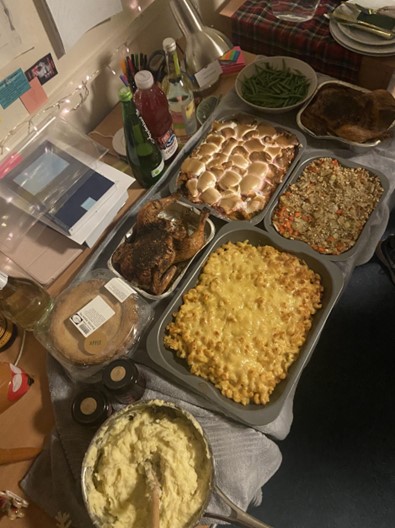 hat makes a good personal statement is VERY different from what makes a good Common App essay. I found a lot of support online, looking at the Student Room, personal statement essay guidelines (honestly, the UCAS page itself was very helpful), and a couple Zoom calls for other UK universities. Although it’s frustrating to have to cram all your information into 4000 characters, I will say that I found it refreshingly simple compared to the number of supplemental essays you have to do for American schools. (Which is to say, if you’re American and on the brink of applying, DO IT!) Ultimately, the hardest part of the application process was probably preparing for the interview. In December, most of my time was spent writing my US school applications, and it was hard to manage my time between that and reading/reviewing for the interview.

Was the interview what you expected it to be?

I prepared for my interview by trying to set aside an hour a day to focus on reading and re-reading. I reviewed some concepts, tried to teach myself a bit of anthropology (rather unsuccessfully), and made sure I had a very strong grasp of the knowledge in my personal statement. I read a couple of books in the weeks leading up to it, and read/digested the news a lot more than usual. Because I didn’t have much time to prep, I also just tried to focus extra hard on my classes—I was taking Politics, Economics, and other relevant courses, so I tried to use those as another source of information in addition to personal reading.

I did my interview for King’s, so it might be slightly different than the HSPS interview for Christ’s. I didn’t have many expectations going in, although I’d heard legends of very complex/confusing questions online. The actual interview was relatively brief, relatively simple, and actually very interesting—it’s nice to talk to experts about subjects you want to study, even if it is in an interview. I also had an admissions assessment for King’s, although I don’t think Christ’s has one (check the University Course Page to see which colleges do and don't require assessments). I did not prepare much for that specifically, beyond what I had already been doing for the interview.

I think my biggest advice for prospective applicants in HSPS is that you don’t need stress about not knowing everything. Particularly in HSPS, where everything links together in one way or another, you can ALWAYS say something about a topic, even if you’re unfamiliar with it. Plus, and this is a common piece of advice, it’s genuinely okay to say you don’t know!!

What is different about your work now, compared to at school?

Adjusting to the Cambridge system is one thing, but adjusting to the English style of exams is another. I’d never sat the type of essay-based, all-or-nothing final exams that are typical of Cambridge/England ever in my life. Last year, I found it challenging to adjust to the pressure, particularly when I was unfamiliar with the essay format. One thing that’s great about HSPS is that in our later two years, we can also choose to do a paper that is a research paper (so not sat as one exam), and a dissertation (also not sat as one exam). So, there is a bit of flexibility there.

What has been your favourite topic from this year and why?

My favorite topic from this year has absolutely been feminist theory. We’ve studied it from a variety of perspectives in all of our subjects, and it’s all just so connected and interesting. Sociology (gender/sexuality), Politics (gender politics), International Relations (feminist war theory/international law).

I remember reading MacKinnon’s “Toward a Feminist Theory of the State” and just being absolutely floored by its implications. MacKinnon’s approach to analyzing gender politics has changed the way I view the world, even if I still don’t necessarily subscribe to everything she’s argued or said. I think that’s one great thing about HSPS—you have snapshots of a bunch of topics in your lectures, and the materials/resources to research them as much as you’d like.

In first year, we have about three supervisions per term for each of our papers, totaling to 12 per term. Usually, it’s about one or two per week, but sometimes we might have none and sometimes we might have more. My lectures this year were a combination of online and in-person—I would often go in person, but it was also lovely to have the option to watch/rewatch them later in the day.

In Christ’s, I like working in my room, at the Christ’s library, in the Plumb auditorium (one of the study spaces in College that are opened up during exam term) or outside in Third Court. I’d also definitely recommend branching out to the faculty/University libraries—the Seeley is nice, the Law library is lovely (you can use the libraries of faculties that are not your own!) and the University Library is also great. It’s a bit of a walk from Christ’s (around 20 minutes), but I’ve found that making myself trek a bit actually increases my productivity!

Where have you lived this year and what did you think of it? 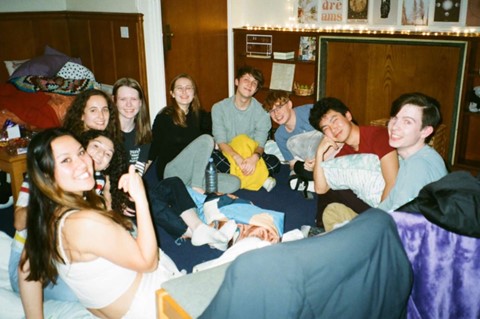 This year, I lived on the ground floor of the Blyth building in Third court. I absolutely loved it. I think it’s one of the most stunning views in the whole college. I remember being a bit nervous because I’d heard that all first years live in the “Typewriter” building (which is nice enough inside, but has some interesting architecture), but that’s a myth!

One great thing about Cambridge is that our holidays are very long. I went back to the US for four weeks in the Winter, and then spent Easter holiday in Zagreb (where my Dad’s side of the family is from). This summer, I’ve been volunteering in Serbia, as well as a bit of traveling on the side. Christ’s offers international students storage space over the summer, which is also something to note… and something I’ve taken advantage of!

Which papers will you be taking next year and why did you choose them?

After first year, students specialize in HSPS. It looks a bit confusing written out, although the HSPS website page has a very helpful flowchart that helps you figure out your options! I’m doing single track Politics and International Relations. Next year, I’ll be taking POL3 (International organization), POL4 (Comparative Politics) POL5 (Themes and Issues in International Relations), and POL8 (The history of political thought from c1700-c1890). I decided to do Politics and International Relations because I found the topics most interesting in first year, but also because I wanted to take the courses offered in later years (Comparative Politics, for example). POL3 and POL4 are required, although you can choose which countries you would like to study in POL4. You must choose between POL7 (political history up until 1700) and POL8, and I essentially chose POL8 because I had enjoyed Hobbes in first year. Finally, I chose to take POL5, in which you write two in-depth research papers rather than sit final exams, because I wanted to try out a bit more autonomy in my writing, and because I tend to learn best through independent research.

Back to Student profiles page / HSPS at Christ's / International Students / Next: Jack's profile