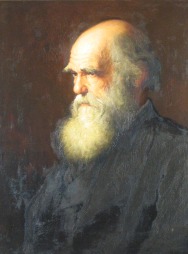 Charles Darwin was an English naturalist whose work revolutionized the life sciences. He is arguably the most famous alumnus of Christ's College.

(Left) The portrait of Darwin which hangs in the College hall is a copy (1883) by the artist, Walter William Ouless (1848-1933), of one commissioned by the Darwin family in 1875 as a birthday present for Darwin. Darwin quipped the portrait made him look like "a very venerable, acute, melancholy old dog".

Darwin's name was entered in the admissions books at Christ's on 15 October 1827. 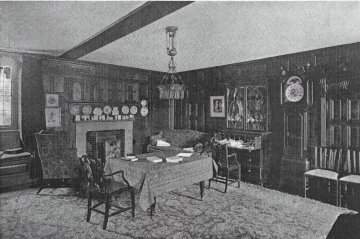 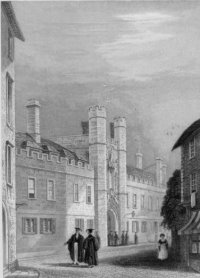 However, as Darwin had forgotten much of his school Greek, he was tutored before coming up to Cambridge in the Lent Term of 1828. All the College rooms were full so Darwin took lodgings over the tobacconist's in Sidney-street, the site now occupied by Boot's the chemist. The view from his window would have been that of the engraving (right). A blue plaque under the the first floor windows of Boot's commemorates Darwin's stay there. On All Saint's Day in November 1828 Darwin moved into a set of rooms in College, as he later recalled, "in old court, middle stair-case, on right-hand on going into court, up one flight, right-hand door & capital rooms they were." According to College tradition the same rooms were once occupied by the great natural theologian, William Paley (1743-1885) whose portrait faces Darwin's in the hall and in the stained glass of the hall's south window. (See below) Darwin's father intended him at this time for the church and Darwin was not altogether unhappy with this prospect. It would provide the leisure and freedom required to pursue his growing scientific interests. While at Christ's Darwin became an avid beetle collector. He had a special six-drawer cabinet built to house his collection. He decorated his room with eighteenth-century engravings of master paintings. Darwin was equally devoted to shooting. As he recalled in his autobiography:

When at Cambridge I used to practise throwing up my gun to my shoulder before a looking-glass to see that I threw it up straight. Another and better plan was to get a friend to wave about a lighted candle, and then to fire at it with a cap on the nipple, and if the aim was accurate the little puff of air would blow out the candle. The explosion of the cap caused a sharp crack, and I was told that the Tutor of the College remarked, "What an extraordinary thing it is, Mr Darwin seems to spend hours in cracking a horse-whip in his room, for I often hear the crack when I pass under his windows." 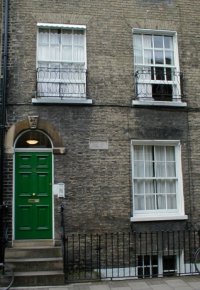 Darwin graduated in the Easter Term of 1831. Although he later recalled that: "During the three years which I spent at Cambridge my time was wasted, as far as the academical studies were concerned." It is certainly the case that Darwin became irreversibly devoted to science at Cambridge. His beetles were more than a hobby and his biological work under his mentor, Professor John Stevens Henslow (1796-1861), prepared him for a life in science. Shortly afterwards he was taught the rudiments of geology by Professor Adam Sedgwick (1785-1873). It was Henslow who passed on the invitation to Darwin to accompany Captain Robert Fitzroy (1805-1865) on board the voyage of HMS Beagle as naturalist and gentleman companion.

Upon returning from the five-year voyage in 1836 Darwin returned to Cambridge to sort out his specimens for three months. He took lodgings in Fitzwilliam Street (today marked by a stone plaque). He dined often in college and regaled the fellows with tales of cannibals and his adventures. Arthur Shipley wrote in the College Magazine in 1909:

[Darwin] was apparently a good deal in college, and was evidently made a "Member of the Room," for his name occurs frequently in the Combination Room wine book. This book, which dates back to pre-Napoleonic times, is one of the few records the college retains of the presence of the great naturalist.

Darwin moved to London in 1837 to begin his life of publishing the results of his voyage, both geological and biological.

His great work On the Origin of Species (1859) demonstrated with converging evidence from geographical distribution, comparative anatomy and embryology, and the fossil record that life evolves. His theory showed how the great variety of living things are related by common genealogical descent and how all living things come to be exquisitely adapted to their environments. The most important mechanism for change was what he called 'natural selection'. This process is the necessary result of the fact that all organisms vary and are not identical copies and vastly more individuals are born than ultimately survive to breed. Therefore only a tiny minority survives to reproduce. Darwin realized that there must be something special about these surviving minorities. The success in surviving was termed selection because it was analogous to the conscious selection of farmers and breeders of which stock to perpetuate. In later works such as The Descent of Man (1871) and The Expression of the Emotions (1872), Darwin showed that there is not an absolute difference of kind between humans and other animals, but one of degree. Although controversial at first, Darwin's work was accepted by the vast majority of naturalists during his lifetime.

Later Darwin sent his eldest son William to Christ's in the 1860s. On 17 November 1877 Darwin was awarded an honorary degree of Doctor of Laws (LL.D.) from the University of Cambridge in Senate House. Darwin died in 1882 and is buried in Westminster Abbey. 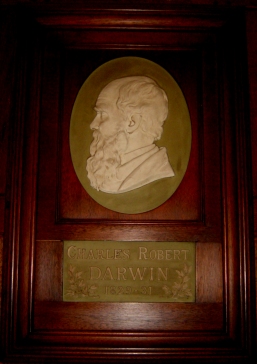 This Wedgwood plaque by Thomas Woolner was placed
in Darwin's room in 1885 by his son George Darwin.

In 1909, the centenary of Darwin's birth and the fiftieth anniversary of the publication of the Origin of Species, celebrations were held at Christ's and the University. Darwin's rooms were made into an exhibition space with many photographs, manuscripts and other artifacts on display. Hundreds of distinguished visitors from around the world came to see the exhibition and signed their names in a book now kept in the Old Library. An American delegation presented the college with a large bronze bust of Darwin made by the sculptor William Couper for the New York Academy of Sciences in the same year. The first bust was given to the American Museum of Natural History who commissioned a copy from Couper to send to Cambridge. The bust now stands in the portico in the college grounds.

Arthur Shipley remarked in a speech at the time: "His relations to Christ's were always of the most cordial kind, and it has ever been a subject of regret to the governing body that their new statutes did not pass through Parliament in time for them to confer the only honour they could confer upon Darwin, that of an honorary Fellowship." Darwin himself recollected in his autobiography written in 1876 "Upon the whole, the three years I spent at Cambridge were the most joyful of my happy life."