CUTAZZ arranges bookings in college rooms/dance studios, usually in central colleges. Classes run on weekdays evenings (6-10pm), each lasting for an hour. Each style has only one session per level of difficulty per week, but you can attend multiple levels and styles. There is no commitment to attend every week. There are auditions for competition teams in various styles at the start of Michaelmas. CUTAZZ has a stall at the annual Freshers' Fair.

"There are a lot of people in the society who haven't danced before, so don't worry! There are some classes at beginners level. I had danced in the past, but not right before coming to Cambridge.

I have a lot of fun doing it, and it's a good and healthy break from work. If you attend regularly you can get to know the people you dance with. There are about two socials a term (Christmas dinner, Garden party, etc) but no need at all to go if you don't want to." 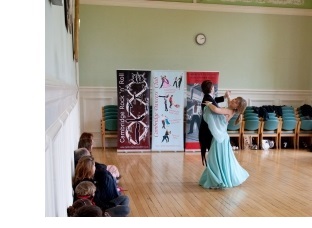 Cambridge University Dancesport Team is based at the Chesterton Sports Centre on Gilbert Road, where trials are held every year to select 20 couples who make up the First Team and compete at Varsity competitions.

At the same time, a Beginners' team is formed, aimed at people who have not danced before starting university. This team requires no prior dance experience and is also formed at the start of the academic year. The Beginners' team trains in Waltz, Quickstep, Cha-cha, and Jive and competes against other Beginners from around the country at the same competitions as the First & Second teams.

Cambridge University Ballet Club offer classes ranging from beginner to advanced level, at Kelsey Kerridge fitness centre on Thursdays and Saturdays and at Homerton College Dance Studio on Fridays. The club also performs at college and corporate events, and puts on a Lent term show every year.

Christ's student Iona is part of the ballet society, and took part in their annual show. You can read more about Iona's experience of studying at Christ's in her student profile here.

Wolfson Latin Nights are social dance nights, which run from 8pm every Thursday in the Seminar Room at Wolfson College.

Cambridge University Breakdance Club runs regular training sessions in the Seminar Room at Wolfson College, and has performed at May Balls in the past.

Cambridge University English Country Dancing Club meets every Thursday from 8-10pm during term time at the Wesley Church Hall on King's Street. They also hold ceilidhs twice a term, occasional Jane Austen evenings (a formal dinner at Emmanuel College followed by dances contemporary to Austen) and a Playford Ball once a year at the end of Easter term.

Cambridge Swing Dance is a non-profit company aiming to promote swing dancing in Cambridge, which runs classes on different styles in the evenings from Monday to Thursday each week, as well as social dancing after each dance.

Exercise and sport at Christ's