There's a Varsity Ski Trip each year and each College has a College rep to recruit and liaise with students in the College.

If you think that you might be interested, have a look at the Varsity Ski trip website, and you will be able to find the Christ's rep at the Freshers' Fair.

Sanchit writes 'In my first year I went on the Varsity Ski trip in December, which was super fun with so many people from College going!' 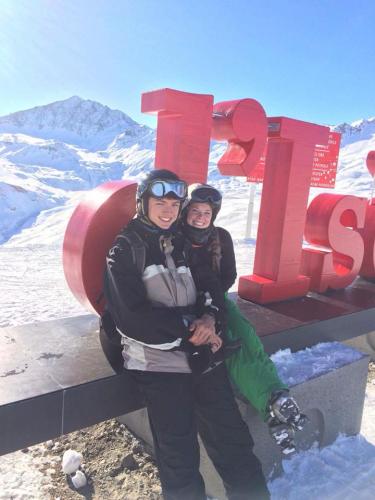 rites' One of my favourite memories is the Varsity Ski trip, which I went on for the first time this year (even though it happens every year). It was so much fun and a great way to learn to ski at a reasonable price as well as relax with friends at the end of the first term.'

Ellie says 'I have been on the Varsity Ski trip both years which was incredible.'

Neophyos writes 'A memory that I would never forget from first year was the Varsity Ski Trip, which is an event taking place every year after the end of Michaelmas term at a ski resort in Europe. There you have the chance of meeting new people from other Colleges of the University of Oxford and Cambridge and learn how to ski at a relatively cheap price, while at the same time taking part in many events.'

Rory writes 'The Varsity ski trip in December is a great option for freshers, giving a much-needed escape at the end of what is sure to be a busy first term.'

Eddie says 'I have been on the Varsity Ski trip for the last two years in December and had a great week both times.'