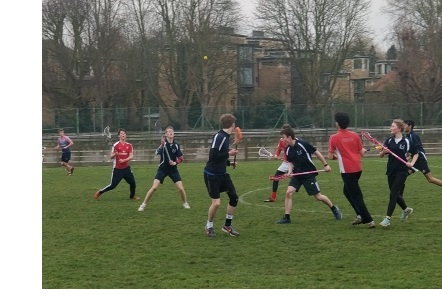 At College level, all the lacrosse teams are mixed. Mixed Lacrosse welcomes players of all abilities, including and especially those who have never played before. They have short training sessions for new players and play a match in the Colleges league every weekend as well as Cuppers (one-day inter-college tournament) at the end of Lent Term.

"It's a great club for making new friends in all different years at Christ’s!"

Cambridge University Lacrosse Club (CULC) train at the University Sports Centre in West Cambridge, the University Sports Ground on Wilberforce Road, and on Jesus Green. All matches are played at Queens' College lacrosse pitches. The club is open to both students and non-students - it competes in the South of England Men’s Lacrosse Association (SEMLA) league on Saturdays, and student members also play in the British Universities and Colleges Sport (BUCS) league on Wednesdays.