Quincentenary tour of the USA and Canada, Summer 2005 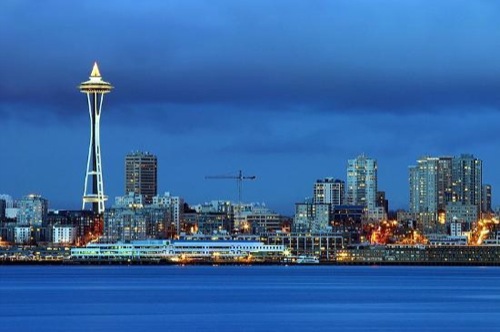 July 2005 saw the Chapel Choir embark on another exciting and highly successful international tour – this time to the West Coast of Canada and the USA.

After spending the 4th of July watching spectacular fireworks in Seattle, we sang to a series of packed houses in Olympia (the capital of Washington state), Victoria, Vancouver and Kelowna, as well as the picturesque island of Salt Spring. Meeting many Christ’s and Cambridge alumni at each venue, we were warmly welcomed by our host families and churches.

Returning to Seattle, we performed to an audience of over 600 in St. Mark’s Cathedral – a wonderful night and a definite highlight of the tour.

The second half of the our trip began with a flight down to San Francisco, from where we drove to California’s State Capital, Sacramento. Another successful concert followed – despite the 40°C temperatures!

Our final days were spent in San Francisco, with two concerts and another tour highlight – singing the Sunday morning Eucharist at Grace Cathedral, which had a wonderful acoustic in which we all greatly enjoyed performing.

We concluded the tour with the traditional dec-can football match, which ended 2-2 after a spectacular equalizer from dec’s goalkeeper, departing Senior Organ Scholar Simon Jacobs!

Despite our busy schedule, everyone tried to fit in as much sightseeing as possible – tandem riding in Vancouver’s Stanley Park (and the broken elbow to show for it!), trips to Alcatraz and the Golden Gate Bridge, cable cars, museums, art galleries and much, much more. No wonder we all returned completely exhausted and in need of a holiday to recover!

"In the midst of life we are in death."

The seemingly timeless words from the 1662 Book of Common Prayer were scarcely three decades old when Henry Purcell set them in his Funeral Music for Queen Mary, performed at her burial in early 1695. Within the year, the 36-year-old composer would also be dead.

Although the program for Thursday's concert by the visiting Chapel Choir of Christ's College had, we were told, been planned some weeks ago; as the dreadful news from London continued to arrive, much of it assumed a whole and terrible new significance. What the concert demonstrated, though, beyond the obvious quality of the choir's music-making, is the remarkable power of music to console and uplift, even in such circumstances.

The three short extracts from Purcell's Funeral Music possessed a spare, even sparse, beauty; each was set mainly for four solo voices and organ, with the full choir only joining in at the close. The knowledge that music like this would be composed for one's funeral would almost make it worth dying.

One of the evening's greatest challenges, both technically and emotionally, was Barber's Agnus Dei, a choral arrangement of the Adagio for Strings, a work that has assumed the role of ceremonial mourning music in recent years. David Rowland took the music at a flowing tempo, yet there was no lack of depth, either to the sound or to the feeling. For perhaps the only time in the evening, there were ocassional insecurities of intonation, yet the massive climax and the lovely close more than compensated.

Space precludes a detailed discussion of all the music performed, but that English tradition was well-represented, with Parry's "At the round Earth's imagined corners" providing a wonderful example of its confident best, in the high noon of the British empire. The performance boasted huge dynamic contrasts and some marvellously acerbic harmonies, which seemed to anticipate later composers, particularly Walton.

Other highlights included a splendidly muscular performance of Kenneth Leighton's Paean by organist Simon Jacobs, a lively and propulsive motet by Bach, Elgar's inimitable setting of Psalm 29 and two short pieces by Faure, all lush harmonies and almost saccharine organ.

The entire evening was a delight from start to finish: for lovers of fine singing and of the English tradition in particular, it was an evening to treasure.