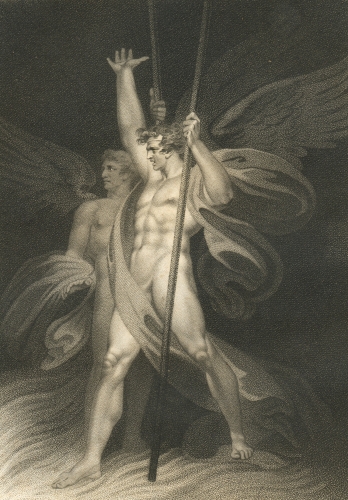 John and Josiah Boydell published this epic three-volume edition of Milton’s works in 1794. The text was set by the great artisan printer William Bulmer (1757-1830). Richard Westall’s twelve plates for Paradise Lost were stipple engraved by six different craftsmen. A Royal Academician by the age of nineteen and later Queen Victoria’s drawing master, Westall also contributed illustrations to the Boydells’ celebrated edition of Shakespeare (1795-1805) and five paintings to their Shakespeare Gallery. Hazlitt disparagingly remarked that his figures ‘look as if cut from wood’. However, the chiseled, Grecian features of his Satan (here summoning his prostrate legions) are strongly reminiscent of the style of his contemporary Henry Fuseli, who also illustrated Paradise Lost between 1790 and 1802.