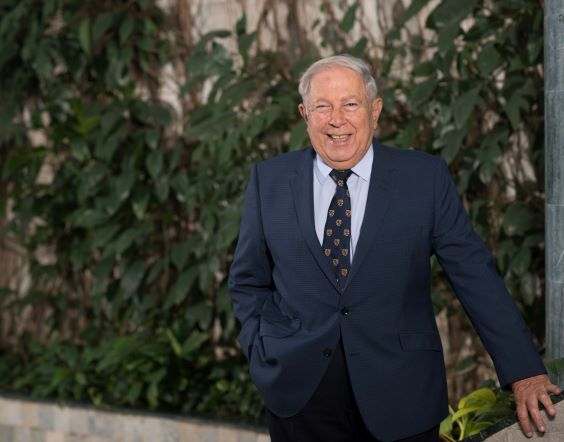 The Department of Chemistry here at Cambridge is to be named in honour of our distinguished Honorary Fellow, Dr Yusuf Hamied.

Dr Hamied matriculated at Christ’s in 1954, earning his BA in 1957, and continuing on to complete a PhD in Chemistry under the supervision of Lord Todd (former Master of Christ’s and Nobel Prize winner). For much of his life, Dr Hamied has been a leader in industry and philanthropy, focusing his attention on education and healthcare. He is currently the non-executive Chairman of Cipla, a global pharmaceutical company started by his late father, Dr K A Hamied, in Mumbai. Yusuf Hamied’s major achievements include the pioneering supply of HIV/AIDS medicines to developing countries at a low cost, saving countless lives. This work is immortalised in the prize-winning film Fire in the Blood* (https://en.wikipedia.org/wiki/Fire_in_the_Blood_(2013_film)). To help patients during the COVID-19 pandemic, Cipla is again providing relevant medicines to healthcare organisations at affordable prices, making treatment more accessible. To recognise his many achievements, the College elected him to an Honorary Fellowship in 2008.

Following a generous benefaction from the Yusuf and Farida Hamied Foundation, the Department of Chemistry will be named the Yusuf Hamied Department of Chemistry until 2050. His transformational gift ensures that chemistry at Cambridge will continue to be world-leading in both teaching and research. His gift endows both a fund to attract and support the world’s brightest academic talent in chemistry, including exceptional early career researchers in disciplines such as synthetic organic chemistry, and outstanding doctoral students from the UK and around the world through the new Hamied Scholars Programme. We very much hope that many of the Hamied Scholars will come to Christ’s.

Here in College we have also benefited enormously from Dr and Mrs Hamied’s generosity and warm spirit, clearly visible to the Christ’s community through the Yusuf Hamied Centre, and also a number of graduate hostels, enabling students to live close to the domus site, with all the advantages of engagement that entails. He has also provided support for graduate scholarships, undergraduate bursaries, and Fellowships.

We are incredibly proud to have Dr and Mrs Hamied as two of the greatest friends of the College, and look forward to being able to celebrate this latest recognition in person with them soon.

* I whole-heartedly recommend the film to you as a compelling and moving depiction of the obstruction of access to low-cost antiretroval drugs to people in Africa and other parts of the global south. The film is available on Netflix: https://www.netflix.com/in/title/70268209 and YouTube: https://youtu.be/lapLC9wNONU (Please note: the YouTube version is in English and has Spanish subtitles)