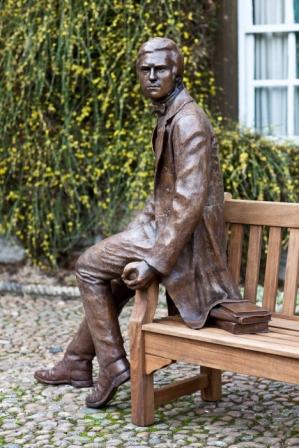 Charles Darwin was one of the most distinguished alumni of Christ’s College, and the most important visitor to the Galapagos Islands.  Prior to his five-year voyage on HMS Beagle, Darwin was an undergraduate at Christ’s, and returned to the College in the period immediately afterwards.  It was from observations made on this voyage, especially of the Galapagos mockingbirds, that Darwin later drew the evidence to support his theory of evolution by means of natural selection.

Christ’s College and the Galapagos Conservation Trust are establishing a lasting partnership between distinguished scientists and researchers with a fund intended to provide support for the activities of people who have shown evidence of distinction in their chosen research field, relevant to present-day aspects of the work originally undertaken by Charles Darwin and which will help to promote the scientific understanding, conservation and long-term welfare of the Galapagos Islands.  We work with the Charles Darwin Foundation and the initiative recognises and wishes to commemorate the immense importance of Darwin’s time spent collecting and observing on the archipelago.

The first Charles Darwin and Galapagos Islands Fellow was Dr Mike Stock, a volcanologist, who was in post from 2016 to 2019, and who is now Assistant Professor in Geochemistry and Director of the Earth Surface Research Laboratory, at Trinity College, Dublin. The current Charles Darwin and Galapagos Islands Fellow is Dr Katie Dunkley, a behavioural ecologist, based in the Department of Zoology, who aims to understand the dynamics of animal interactions and ecological networks. Her research focuses on behavioural interactions at a community level to explore how and why animals interact. She is passionate about the marine environment and its conservation, with her previous and future research focusing on coral reefs.

Charles Darwin had a rare genius, nurtured to a considerable extent by his experiences and the friendships generated during his time at Christ’s and during his voyages on the Beagle.

As well as the Fellowship, the Fund supports a Scholarship Scheme (application form).