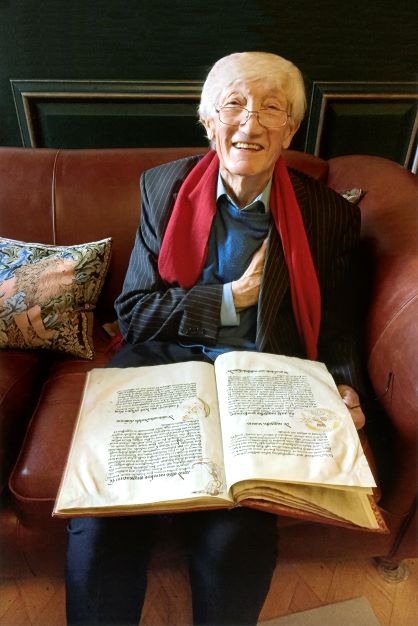 The College is very sad to announce that our Fellow-Commoner, Professor Geoffrey Martin, died on Monday 7th March 2022.

Geoffrey left the Fellowship in 1970 to return to University College London as a lecturer in Egyptology, where he was ultimately Edwards Professor of Egyptian Archaeology and Philology.  He was also a Senior Fellow of the McDonald Institute for Archaeological Research here in Cambridge.

He participated in and directed fieldwork and epigraphic missions in The Sudan (Buhen), in Egypt (Saqqara, Amarna and The Valley of Kings, Luxor) and was Field Director on the Cambridge Expedition to the Valley of the Kings.   He was most well known for his discoveries of the tomb of Maya, Tutankhamun’s treasurer, and the private tomb of Horemheb.  Geoffrey was the author of numerous monographs, mostly concerning results of archaeological fieldwork, epigraphy and sigillography, and papers on Egyptological themes.

Following his retirement Geoffrey returned to Cambridge and was elected a Fellow-Commoner of the  College in 1998.  Since then he has been a much esteemed and valued member of the College community, tirelessly contributing as Honorary Keeper of the Archives, Honorary Keeper of the Plate and Acting Praelector in 2009.  He took particular interest in the Lady Wallis Budge Junior Research Fellows in the College, participating in seminars they arranged and acting as a wonderful guide and mentor.

Geoffrey was a familiar figure amongst us, visiting his beloved College several times a week.  He will be greatly missed,  he was a very dear and charming man.