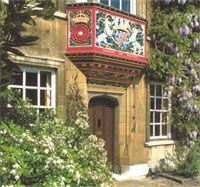 Christ's College was first established as God's House in 1437 by William Byngham, a London parish priest, for training grammar school masters. Shortly after receiving its Royal Licence from Henry VI in 1446, God's House was forced to move from its original site as this was needed for the King's new project (what was to become King's College). God's House moved to its present site in 1448 and in the same year received a second Royal Licence. This licence may be regarded as the Foundation Charter.  Click here for a list of the Proctors of God's House.

Following the death of her third husband, and the accession of her son as King Henry VII, the Lady Margaret Beaufort turned her energies to good causes. No doubt at the suggestion of her confessor, Bishop John Fisher, she decided to enlarge God's House. In 1505, with a royal charter from the King, the College was re-founded as Christ's College. Lady Margaret has been honoured ever since as the Foundress.

Surviving the twists and turns of the Reformation, Christ's became one of the leading Puritan colleges of Elizabethan Cambridge. In 1625 it admitted the young John Milton, who would become a leading Puritan apologist of the Civil War and one of the greats of 'English' literature. The Garden still boasts what is known as 'Milton's Mulberry Tree'.

The boom in student numbers in the seventeenth century required new accommodation, beyond the original College around what is now 'First Court'. The result was the beautiful 'Fellows' Building., built in the early 1640s after an appeal to Fellows and Old Members. This raised some five million pounds in today's money and we still have the list of donors.

Over the next century or so, Christ's was noted for several eminent scholars who sought to harmonise traditional Christian faith with the new truths of natural science. These included Cambridge Platonists such as Ralph Cudworth, and William Paley, whose Evidences of Christianity (1794) remained set reading in Cambridge until the twentieth century.

But Paley's synthesis of religion and science was soon to be overturned by another Christ's man - Charles Darwin, who came up in 1828, and lived in Paley's old rooms in First Court. On the Origin of Species was published some thirty years later, but the young Darwin's interest in botany and geology was nurtured at Cambridge.

Like the rest of Cambridge, life at Christ's was transformed by the Victorians, with more rigorous exams, the rise of experimental science and the opening of the University to non-Anglicans. The first half of the twentieth century was scarred by two world wars, whose effect is movingly commemorated on the plaque in the Chapel. The College of the 1930s is evoked (and caricatured) in the celebrated novel The Masters (1951) by the scientist and author, C.P. Snow.

After 1945 Christ's shared in the general boom in higher education, with new blocks to complete Third Court and then New Court designed by Sir Denys Lasdun. Among its intellectual dynamos were Lord Todd, the Nobel prize-winning chemist; James Meade, a Nobel laureate in economics; and Sir John Plumb, the celebrated historian.

This is only a taste of the College's past. Those with bigger appetites should consult the quincentenary history edited by David Reynolds, Christ's: A Cambridge College over Five Centuries (Macmillan, 2004) with contributions from distinguished Christ's historians such as Simon Schama, Roy Porter and David Cannadine.